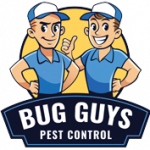 Wanting to maximize SEO results and expand their online strategies, The Bug Guys turned to Yroc Consulting. Learn how we helped this newly-formed B2C brand increase revenue with SEO!

Vern and Don, local leaders in termite and mosquito extermination, have provided unparalleled services for San Angelo and the surrounding communities of the Concho Valley for over 40 combined years,  When they formed The Bug Guys Pest Control, they took San Angelo by storm providing customers with the innovative solutions they want and need.

The Bug Guys were ranking organically on page 8 of Google for the keywords ‘pest control’ and ‘san angelo pest control’ which meant they were only seeing direct and ad traffic to their website. Ads and organic were ranking page 1 for the company name. This had a drastic effect on phone call leads as they had only received one in the total of four months the website had been live. The Bug Guys provide a superior service, it just needed to be seen online by the masses.

Prior to discovering SEO best practices using Yroc Consulting, The Bug Guys allocated a budget to promote Google Ad campaigns. With customers and the future in mind, The Bug Guys believed their SEO footprint wasn’t big enough and while the lack of phone calls got Don and Vern started, they sought after a greater understanding of search rankings and website traffic.

With approximately 20 competitors in the local market ranking for a combination of keywords including the industry, city, ‘mosquitos,’ and ‘termites,’ The Bug Guys Pest Control had an uphill battle to outrank many established brands and nations branches.

The Bug Guys partnered with Yroc Consulting to provide search engine optimization to their online platforms. An in-depth competitor analysis and keyword research provided the Yroc team with the data they needed to begin a wall-to-wall 40-point SEO audit. Along with on-page and off-page SEO best practices, inconsistencies were found throughout different platforms for their NAP information. With this corrected and optimization complete on their Google My Business, The Bug Guys were in a position to be seeing a change in organic listings, and ultimately sales qualified leads.

Within one month of beginning SEO, The Bug Guys saw a thundering increase in organic ranking. For the keyword ‘san angleo pest control,’ they had a jump from page 8 on Google to page 1. This increase in SERP rankings brought in new and unique organic traffic (an increase of 285%) and the phone began to ring again (35 phone leads the first month.) By utilizing Yroc Consulting SEO services, there is no longer a need for Google Ad spend, bringing additional substantial savings. Driving SEO efforts on a mere three hours per week, The Bug Guys has seen outstanding results with Yroc Consulting.